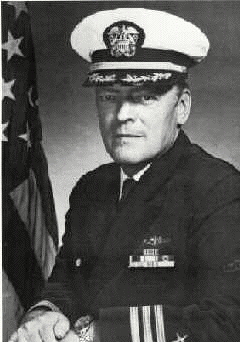 Naval officer, born in Pocatello, Idaho, USA. Orphaned as a child, he spent his early boyhood being shuffled between adoptive parents in Idaho and relatives in California until 1938 when he went to St Joseph's Children's Home in Culdesac, Ida. From 1941 to 1945 he attended the famous Boys Town (near Omaha, Nebr); after leaving to spend two years in the navy, he returned to graduate with his class in 1948, then went on to the University of Nebraska, where he majored in geology. In June 1953 he was commissioned in the US Navy Reserve and spent most of his career as a submarine officer. His first command of a surface ship came in May 1967, the Pueblo, a small intelligence-gathering ship, and it was on its first tour of duty, off the coast of North Korea, that on January 23, 1968, he surrendered the ship when it came under fire from the North Korean navy (four Americans were wounded, and one later died). He and his crew were imprisoned until December 22, 1968, during which time Bucher and many of his men were forced to sign a letter asking the USA to admit the ship had been inside North Korea's waters, with the clear implication that they had been spying. In 1969 a naval court of inquiry recommended that Bucher and one other officer be court-martialed, but this was cancelled by the Secretary of the Navy. Bucher never was given a major command and he retired from the navy in 1973; it was 1990 before he and all others on the Pueblo were awarded the medals given to other POWs.

In retirement Mr. Bucher was an artist and guest speaker. He died 28 January 2004 after a long illness.

The background on this page was created from one of Mr. Buchers paintings and is used with permission from the Pueblo Association. .