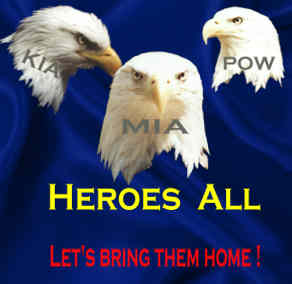 History of the POW/MIA Flag

In 1971, Mrs. Mary Hoff, an MIA wife and member of the National League of American Prisoners and Missing in Southeast Asia, recognized the need for a symbol of our POW/MIAs. Prompted by an article in the Jacksonville, Florida TIMES-UNION, Mrs. Hoff contacted Norman Rivkees, Vice-President of Annin & Company which had made a banner for the newest member of the United Nations, the People's Republic of China, as a part of their policy to provide flags to all UN member nations. Mrs. Hoff found Mr. Rivkees very sympathetic to the POW/MIA issue, and he, along with Annin's advertising agency, designed a flag to represent our missing men. Following League approval, the flags were manufactured for distribution.

The flag is black, bearing in the center, in black and white, the emblem of the League. The emblem is a white disk bearing in black silhouette the bust of a man, watch tower with a guard holding a rifle, and a strand of barbed wire; above the disk are the white letters POW and MIA framing a white 5-pointed star; below the disk is a black and white wreath above the white motto YOU ARE NOT FORGOTTEN.

Concerned groups and individuals have altered the original POW/MIA Flag many times; the colors have been switched from black with white - to red, white and blue, -to white with black; the POW/MIA has at times been revised to MIA/POW. Such changes, however, are insignificant. The importance lies in the continued visibility of the symbol, a constant reminder of the plight of America's POW/MIA'S.

On March 9,1989, a POW/MIA Flag, which flew over the White House on the 1988 National POW/MIA Recognition Day, was installed in the United States Capitol Rotunda as a result of legislation passed overwhelmingly during the 100th session of Congress. The leadership of both Houses hosted the installation ceremony in a demonstration of bipartisan congressional support. This POW/MIA Flag, the only flag displayed in the United States Capitol Rotunda, stands as a powerful symbol of our national commitment to our POW/MIAs until the fullest possible accounting for Americans still missing in Southeast Asia has been achieved. 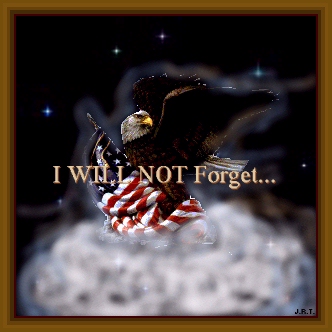