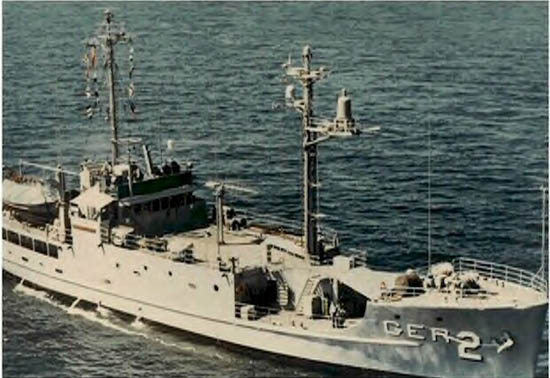 On January 23, 1968, the Pueblo was off the coast of North Korea, a communist regime. Four North Korean patrol boats surrounded the craft. The Pueblo's commanding officer, Comdr. Lloyd Bucher, protested that the ship was in international waters, beyond the 12- mile (19-km) limit, claimed by North Korea. North Korean crewmen boarded the Pueblo. The Pueblo, armed only with two machine guns, offered little resistance. Bucher ordered crewmen to burn secret documents. While doing so, four U.S. crewmen were wounded by North Korean fire, and one subsequently died. The attacker seized ten bags of documents.

The 83 officers and crewmen were taken to the port of Wonsan and imprisoned. The United States demanded their release. The Koreans refused, charging that the ship had been captured legally in Korean waters. President Lyndon Johnson activated 15,000 military reservists and bolstered U.S. forces in the area. On January 24, the North Korean radio broadcast a purported confession of Bucher, who allegedly admitted that his ship had violated Korean waters and that it was on a spy mission. On March 4, President Johnson received a letter purportedly signed by all 82 surviving crewmen stating that they would be released only if the United States admitted violating North Korean waters, apologized, and gave assurances that it would not happen again.

Throughout 1968, U.S. and North Korean representatives met at Panmunjom in Korea. An unusual agreement was finally reached. The United States, in a written statement, acknowledged that the Pueblo had intruded into North Korean waters, and apologized. But before signing, U.S. Maj. Gen. Gilbert Woodward read a statement disavowing the admission. He signed the agreement "only to free the crew". The 82 men and the body of their comrade were returned to U.S. control on December 22. The Koreans detained the Pueblo. At a U.S. Navy court of inquiry in 1969, Bucher contended that he lacked both weapons, to defend the ship and equipment to destroy the secret documents quickly. He and the crewmen described how they had been beaten and forced to sign confessions. High ranking-ranking naval officers acknowledged that no air or sea forces were in position to aid the Pueblo in the event of attack. Although the court recommended that Bucher and another Pueblo officer be tried by court-martial, Navy Secretary John Chaffee announced that no disciplinary action would be taken against anyone. But many persons in and out of the Navy believed that the incident left unresolved questions relating to the defense of U.S. ships and the conduct of U.S. prisoners of war.

The Defense Department has a strange way with awards. Until this week, the crew of the U.S.S. Pueblo, imprisoned after the ship was seized by North Korea in 1968, had not received the Pentagon's POW medal. Since the U.S. and Korea were not at war at the time, former Commander Lloyd Bucher and his men were classified as mere "detainees." It took an act of Congress to change the Pentagon's mind.